Mobile Apps that (Continue to) Surprise and Delight 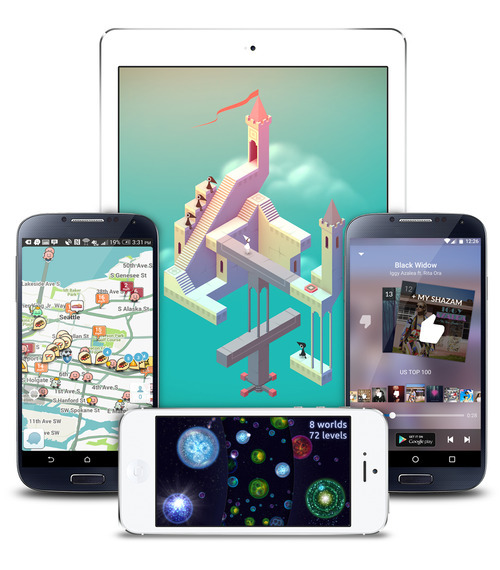 With stellar design, advanced functionality, unprecedented success, surprising innovation, unsurpassed longevity or a combination of all, these are the apps that continue stand out in the sea of 1.5 million (and counting).

Released by UsTwo in 2014, this surreal, interactive game turns perspective on its head in a visually exquisite programming achievement. It’s so beautiful, users can even capture game screens and save them to Photos.

Despite the substantial risk of a $3.99 price tag and being from a relatively unknown app development shop, Monument Valley has been a huge and sustained success. It has consistently been a Top Paid and Top Grossing app since it was launched.

Its combination of stunningly beautiful graphics and incredible gameplay challenges our ideas of physics, and challenges currently held ideas of app ROI and app success.

The first crowd-sourced mapping app, Waze goes far beyond getting you to your destination. Most mapping apps rely on complex algorithms calculating best paths and ETA based on average road speed and general traffic conditions. Waze aggregates traffic data and ETAs from other Waze users, allowing your fellow drivers to give immediate feedback on traffic conditions and possible problems.

In June 2013 Google bought Waze for $966 million. Its a fascinating acquisition which has been the topic of much discussion in the mobile sphere. It is not clear how much of Waze’s tech has been integrated with Google Maps but one thing is clear: Google is watching this valuable data very closely.

Debuting on the iPhone 2 in July 2008, Shazam may be the oldest third-party app on most peoples’ mobile phones. As almost everyone knows, Shazam is an amazing app that can identify a vast array of songs by using your phone’s mic. It can reliably identify songs with only a few seconds of music play even in a noisy restaurant or bar.

With more than 50 million worldwide-users, how Shazam makes a profit may still seem like a mystery. Though the iPhone version may be the Shazam you know best, it still represents only 20% of the company’s offerings, and was the first app they ever offered for free. In-app ads and a percentage of each song purchase users make through the app have made the free app a huge success.

Amazing apps come and go like radio hits we all love but a rare few become all-time classics. It is safe to say Shazam is one of those rare apps that has and will withstand the test of time.

At its heart, Osmos is based on Newton’s Law Third Law of Motion: for every action there is an equal and opposite reaction. In the game, this translates to a sealed system of matter and energy based around the utterly simple goal of absorbing smaller objects to grow to be the biggest.

The physics of Osmos are exceptional, with 47 levels representing momentum, gravitation, orbital physics, projectile dynamics and even antimatter. But while the player has to take into account relatively complex ideas of momentum and mass conservation, the game nonetheless is a relaxing and almost meditative experience.

Simple, beautiful, calm and heady, I have never been able to accurately communicate how delightful this app is to play. Like so many apps, Osmos must be played to be appreciated.