Why Your Brand Must Translate Your Mobile App

Neglecting to translate your app is neglecting an opportunity engage your users in the language that’s relevant to them.

It’s difficult to understand why a brand wouldn’t offer an app in the language their users speak, especially in a country where a full 20% of citizens are non-English speakers. 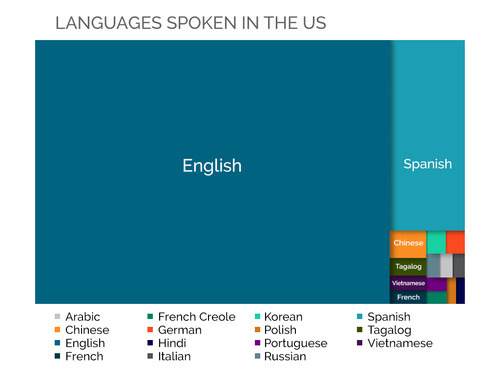 Hispanics in particular are the demographic most engaged with mobile devices, yet far too many feel that brands aren’t doing enough to make their apps accessible to Spanish speakers. In a recent survey I worked on, 45% of fluent Spanish speakers aged 18-34 said they felt this way.

Among the 500 Hispanics polled, nearly one in four (22%) said that they would be much more interested in learning about a brand and its offerings if that brand offered an app in Spanish.

Research and data collection agency YouGov estimates that 45 of the 52 million Hispanics in the United States (86.5%) speak Spanish as a first or second language. And in the mobile sphere a surprising study by Nielsen noted Hispanics are 28 percent more likely to own a smartphone than non-Hispanics. Hispanics over-index on mobile activity, especially when it comes to time spent on mobile apps.

To quantify the gap between Hispanic engagement and brand support for Spanish-language apps, we researched over 1,300 iOS apps from the top 50 of ClickZ’s top 100 most valuable brands report. 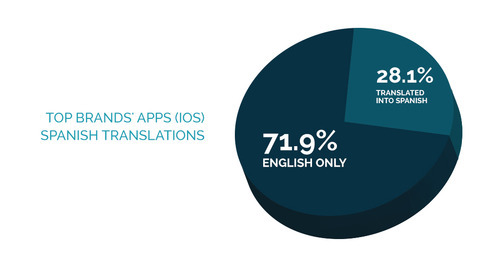 I led analysis of several variables, including the platform (iPhone, iPad or Universal) and listed languages. We manually downloaded every mobile app offered by ClickZ’s top 50 brands, to verify which offered a Spanish translation.

Although we suspected that U.S. Spanish speakers are underserved, I were still surprised by the findings. Of the 1,311 of ClickZ’s top 50 brands’ mobile apps surveyed, only 369 (28 percent) were translated into Spanish at the time of our survey.

I found a clustering effect around industries. For example, automotive skewed far below average, with BMW, Toyota and Honda offering very few of their mobile apps in Spanish. Even more unexpected, some of the most well-known and common household names such as McDonald’s, Pepsi, Budweiser, Kraft, Gillette and Visa offered no Spanish translations for any of their apps.

McDonald’s was one of the few major brands that offered a translation of its app, creating a French version right before adding Canadian support (Canadian federal laws require food labels to be bilingual).

A few top-50 brands are excelling. Canon is translating every app not only into Spanish, but at least five other languages as well. SAP, Samsung and offers a wealth of other languages, including Spanish, for a huge percentage of their iOS apps. 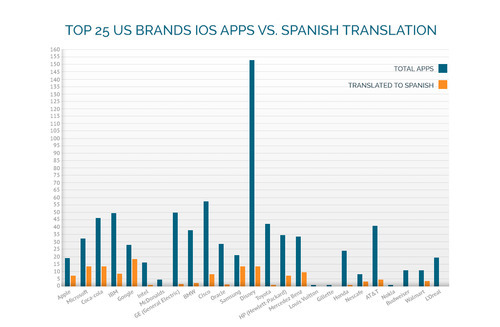 These brands set the bar for trying to excel in the mobile space by engaging users in their native language. By translating their apps, they create a more profound and engaging experience that builds brand loyalty.